The Women’s World Cup in Soccer ends in a week. Although soccer is the most popular sport in the world, FIFA, the governing body of the soccer, did not hold a World Cup for women players until 1991. Did you know that…

So if it’s too hot out to play sports, check out these books on soccer and women’s sport history.

Forward: A Memoir by Abby Wambach
Available at Midlothian

“Abby Wambach has always pushed the limits of what is possible. Named by Time magazine as one of the most influential people of 2015, the iconic soccer player captured the nation’s heart when she led her team to its recent World Cup Championship. Admired for her fearlessness and passion, Abby is a vocal advocate for women’s rights and equal opportunity, pushing to translate the success of her team to the real world. She has become a heavily requested speaker to a wide a range of audiences, from college students to executives at Fortune 500 companies. In Forward, Abby recounts her own decisions, wins, losses, and the pivotal moments that helped her become the world class athlete and leader she is today. Wambach’s book goes beyond the soccer field to reveal a soulful person grappling universal questions about how we can live our best lives, and become our truest selves. Written with honesty and heart, Forward is an inspiring blueprint for individual growth and rousing call to action.”- publisher information 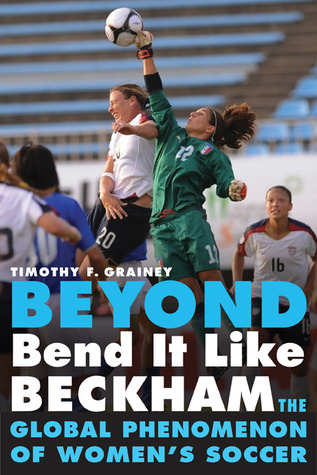 Beyond Bend It Like Beckham: the global phenomenon of women’s soccer by Timothy F. Grainey
Available at Midlothian

“Though it burst into public consciousness only with the 1999 World Cup, women’s soccer has been around almost as long as its male counterpart, flourishing in England during and after World War I. From the rise of women’s soccer following Title IX legislation in the early seventies to the watershed 1999 World Cup performance that turned the American team into instant celebrities, soccer is now the most popular sport for girls and women, with participation growing exponentially worldwide. Beyond “Bend It Like Beckham” presents the first in-depth global analysis of the women’s game—both where it has come from and where it is headed. With commentary from key players, coaches, and administrators, Timothy F. Grainey follows the sport’s reach into the unlikeliest places today, even countries where women were banned from playing soccer just a few short years ago.” – from goodreads.com

More than Just a Game – Soccer vs. Apartheid: the most important soccer story ever told by Chuck Korr & Marvin Close
Available at Midlothian

“In the hell that was Robben Island, inmates united courageously in an act of protest. Beginning in 1964, they requested the right to play soccer during their exercise periods. Denied repeatedly, they risked beatings and food deprivation by repeating their request for three years. Finally granted this right, the prisoners banded together to form a multi-tiered, pro-level league that ran for more than two decades and served as an impassioned symbol of resistance against apartheid. Former Robben Island inmate Nelson Mandela noted in the documentary FIFA: 90 Minutes for Mandela, “Soccer is more than just a game. The energy, passion, and dedication this game created made us feel alive and triumphant despite the situation we found ourselves in.”