History seems to elicit one of two responses from people. On one hand, you have the people who really enjoy it and genuinely get excited about history. They can’t get enough of it and are constantly searching for more materials to read and watch. On the other hand, there’s the people who dislike history. It just isn’t their favorite subject, and often the reason is that the material and how it’s presented is incredibly dry and boring.

As a history major, I obviously was one of those people who found history fascinating. I was like the above description. I couldn’t get enough of it and would often rather watch a documentary on TV than one of the popular shows (unless the popular show was about something historical, and then I was interested… Shout out to HBO’s Chernobyl!). I never understood how people could say that history was dry and boring when there was so much interesting information out there. Then I got to college, and I discovered that presentation was key. I slogged through some of the most boring books I’d ever come across and at times even struggled to stay awake as I read them.

Once I’d graduated, I still wanted to continue learning and educating myself on my favorite subject. With many “educational” networks now airing reality TV and the one network with the word “history” in the name airing mostly shows about aliens and conspiracy theories, I came to the conclusion that books were going to be the main way I’d have to continue my informal historical education. I was nervous, though, because after four years in college, I’d learned just how boring history books could be. However, curiosity got the best of me, and I found myself frequently checking out items from the history section of my local library.

I won’t lie – I came across some extraordinarily boring books in my quest to continue my historical education. But I found some very interesting and readable books as well. The following books are a few books that I found to be extremely readable and interesting, and are also available as audiobooks through OverDrive courtesy of VCCS. 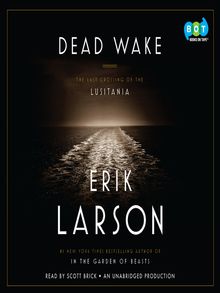 Title: Dead Wake: The Last Crossing of the Lusitania

What’s it about: In 1915, World War I was in full swing. However, the United States was yet to formally enter the war. Ocean liners were still one of the major forms of transport between Europe and the United States, and even though the waters around the United Kingdom were considered a warzone, the ships were still making frequent passage between the two continents. Tradition held that civilian vessels were considered off-limits from attack, and when he set sail on May 1, 1915, William Thomas Turner, the captain of the Lusitania, was putting an immense amount of trust in the expectation that Germany would follow that expectation. Germany, however, seemed determined to change those rules. More importantly, Walther Schwieger, the captain of Unterseeboot-20, was more than happy to oblige. Meanwhile, a secret British intelligence unit was tracking Schwieger’s u-boat as Schwieger tracked the Lusitania. As the two water craft neared Liverpool, fate gradually pushed their paths together, ultimately creating one of the greatest maritime disasters in history. It is a story that most people think they know (as it is, after all, taught in history class), but is this incident really as simple as it seems to be?

Why it’s so great: One of the first things readers should know about Dead Wake is that it absolutely positively does not read like a history book. Instead, it reads almost like a novel, its tone conversational and relaxed. Readers get to meet a wide cast of characters ranging from President Woodrow Wilson to Charles Lauriat (a famous bookseller). However, readers are also informed at the very beginning of this book that what they were taught in history class isn’t exactly the whole story. This bit of intrigue combined with the author’s narrative style of writing makes for a book that hooks you immediately. Dead Wake almost reads like a thriller… if, of course, that thriller took place in 1915 and you already had a general idea of how the book was going to end. The fact the author can take new information and present it to readers while still keeping the book interesting is just one of the reasons why this is one of the best history books out there.

A quote: “The track lingered on the surface like a long pale scar. In maritime vernacular, this trail of fading disturbance, whether from a ship or torpedo, was called a ‘dead wake.’” 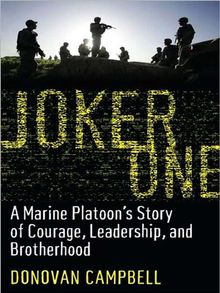 Title: Joker One: A Marine Platoon’s Story of Courage, Leadership, and Brotherhood

What’s it about: Donovan Campbell graduated from Princeton and decided to join the Marines, having realized that being a Marine officer would provide him a variety of opportunities. He would have the chance to give back to his country, engage the world, and learn to lead. His forty-man infantry platoon was called Joker One, and Campbell had just months to train this group of new Marines into a cohesive fighting unit. Eventually these men would become his family, and this family would be assigned to Ramadi, the capital of the Anbar province of Iraq. Anbar was a powder-keg just waiting for an explosion, and when it did explode, Joker One was in the heart of it. Over the course of seven months, Joker One experienced day-to-day, house-to-house combat. Nearly half of Campbell’s platoon was wounded, but Ramadi never fell to the enemy. Told by the leader of this group, Joker One is a firsthand account of some of the fiercest fighting during the Invasion of Iraq, as well as the importance of leadership, loyalty, and camaraderie through the best and worst of times.

Why it’s so great: One of the first things readers should know when starting Joker One is that it’s a memoir. This, in my opinion, makes it a lot easier to read. This is not to say that the content of Joker One is easy. It is, after all, a book about war, and Campbell doesn’t mince words at all. He owns his mistakes and gives credit where credit is due, which is refreshing, especially in military memoirs. By not glossing over anything, especially the really difficult parts of the deployment, Campbell effectively brings the reader into his world. The story he is telling becomes more personal, making the book that much more compelling. Unlike many memoirs, which can be dry and boring, Joker One is raw and really grabs the reader by the hand and pulls them through what this platoon went through while they were deployed to Iraq.

A quote: “I became amazed at how much my men would tolerate if someone just took the time to explain the why of it to all of them.”

What’s it about: Everyone has heard of the Columbine shooting. But do we really know what happened? Or what led up to it? Drawing off of ten years of research, Dave Cullen has written what is widely regarded as the definitive account of what took place on April 20, 1999. He pulls from a variety of sources, including evidence, insight from some of the world’s leading forensic psychologists, and the killers’ own words and drawings. Painting portraits of two polar opposite killers that contrast with the resilience and redemption among the survivors, Cullen illustrates how Columbine became the template for two decades of “spectacle murders,” urging us to understanding the crime that sparked the plague of school shootings that has been impacting the United States.

Why it’s so great: Though Columbine is presented as an account of what took place that fateful day at Columbine High School, it examines so much more than that. Cullen looks at the past, examining the events that led to Eric Harris and Dylan Klebold killing their classmates while also looking at events that would take place in the years following the shooting. He proves wrong so many of the assumptions that the media and population made about the shooters, victims, and what happened, especially in the library. It is important to note that Columbine doesn’t sugar-coat anything of what happened, but instead is graphic and brutal at times. And it tells us what we know, but often don’t want to acknowledge: that it’s not often a singular event that leads to horrific events such as the shooting at Columbine High School, and the truth of the matter is more complicated that we’ll ever imagine it to be.

A quote: “The final portrait is often furthest from the truth.”